How to Stand Out in the Thought Leadership Crowd

How to Stand Out in the Thought Leadership Crowd

In a research study we conducted with the Association of Management Consultant Firms (AMCF) earlier this year, we looked at how effective marketers at consulting firms considered their thought leadership.

This was the sixth time we had asked the question since 2006, so we can look (in Figure 1) at how those numbers have changed over the years.

Figure 1: What Marketers Think About Their Firm’s Thought Leadership

There has been some fluctuation but, overall, the middle (moderately effective) has grown at the expense of the top (highly and extremely effective) and the bottom (slightly or not at all effective).

So what’s going on?

The simplest explanation is that with the extraordinary increase in thought leadership marketing activity over the last decade or so, companies that weren’t very good at it have gotten better. However, that makes it harder than ever to stand out from the crowd.

Is there any evidence to support this conclusion? There is certainly hard evidence testifying to the rise of thought leadership marketing activity and anecdotal evidence about the increased professionalization of the field.

Regarding the volume of material produced, one research firm has noted that the number of thought leadership articles produced by the 30 consulting firms it tracks has risen from 1,500 to 20,000 over the decade 2002-2012.

Google Trends shows a 30% increase in interest in thought leadership as a search term since 2011, and you can see from the dotted trend line that the growth rate is increasing. (See Figure 2). 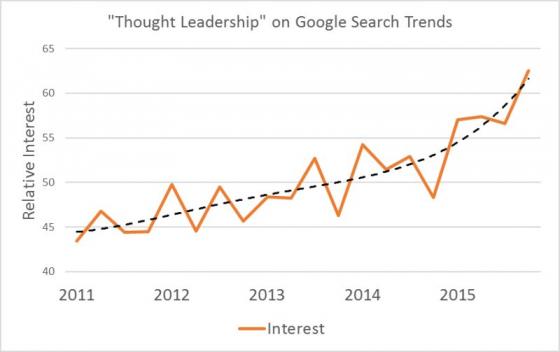 And we’ve seen the number of companies with thought leadership professionals grow substantially over that period, too. Many of our clients now have a director of thought leadership or a similar position. Just five years ago, hardly any did.

Many companies that weren’t doing thought leadership marketing well have had a lot of practice over the last few years. With the increasing volume of work and the increasing number of specialists employed in the field, it shouldn’t be surprising that more companies are doing it (moderately) well.

But while one problem largely has been solved – poor content poorly marketed – another has emerged: with so much material published on so many topics, it’s significantly harder to differentiate your content from your competition’s.

But we’d be poor thought leadership experts if we couldn’t suggest a solution. And we can. First, we know from this and previous studies what channels are most effective for attracting attention to your content:

Of course, no matter the channel, your content must be good (i.e., thought-leading) to stand out. And, yes, we know how to do that, too, including the criteria for evaluating it, the structure of a qualifying piece, and the process for producing it.

If you do all these things, here’s an example of what you can expect. In 2014, a UK leadership coach, Roger Jones, of Vantage Hill Partners, did some primary research, both qualitative and quantitative, about what CEOs are afraid of. He marinated his insights with his CEO coaching experience and then wrote an article on the topic that he pitched to HBR.org. It was accepted three days later and published four days after that. With a modest PR push, it led to stories in the Wall Street Journal, Inc. magazine, and CFO.com, as well as several trade journals. A client event he had organized in London attracted more HR executives (his target audience) than he could accommodate, and a dozen more asked for meetings.

Standing out from the crowd may have become more difficult, but there is no mystery to doing it. It just takes a methodical approach and some hard work.